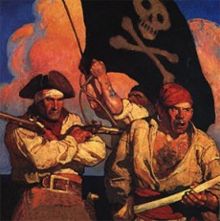 Pirates are experts in gold gathering and subtle planned conflict. They are also well suited in preventing opponent and ally alike from achieving their alloted loot, whether that be unique items, ectoplasm, or merely their share of the gold. In order to do this they make use of a multitude of skills. Pirating Charm skills allow the player to achieve true status of pirate through their rambling and pursuing of wenches. It also allows the Pirate to be freed from the status of landlubber, giving them free roam of the seas and locations thereupon. Treasure Hunting skills make the player more receptable to the loot of the environmental elements and fallen enemies. Cunning Plan skills are the unpredictable part of every Pirae's arsenal. These plans can be as far fetched as taming sea turtles to assist in battle, to merely giving the opponent a quick sharp shot in the gills, rendering them unable to move. Pistol skills enhance the performance of the Pirate specific weaponry in both range and damage output, making them formidable in gunpowder combat.

The patron god of sea faring folk is a forgotten sea god Proteus, who appears in the form of a giant Sea Naga. Since such a god has never been heard of outside the tales of many a mad pirate, it unlikely such a god truely exists.

The Pirate's primary attribute is Pirating Charm, it can only be used by a Pirate.