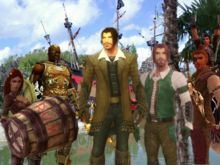 Arrr laddy, this here be a list of the crew of Captain Marcus Cray. He be a piraty leader with his second mate Dave The Pirate. The rest be lowlife thugs that be having no other place to go and with promises of the Cap'ns personal rum supply they be under the colors of DotB.

Recently the Cap'n has recruited a female pirate, this has caused an uproar from one of the crewmates Deadeye Bucktooth, shouting phrases like "It be uncalled for!" and "Thar be mutiny on yonder horizon!". However after a night of heavy drinking the only comment Deadeye had on the subject was "Aimee Shotz be no wench, sh.. he be a pirate!". What has occured during this night has been unrecorded as nobody was around to witness it.

The flag of the crew is that of a regular Skull & Crossbones, in addition to the Rose and Sword of the guild cape from the Defenders of the Blackblade. You can find it at times hoisted up the big pole that most boats have on their pirate ship docked at the Wizard's Isle.

The following 7 pages are in this category, out of 7 total.