Defenders of the Blackblade

Defenders of the Blackblade

The Defenders of the Blackblade are a guild for the Arenanet game, Guild Wars. The Guild was originally founded by Calliara Blackheart, as a means of contact within the game for real life friends. Although the Guild is primarily European based, it's members now span the entire globe.

Built on an ethos of teamwork and helping one another. The Guild has developed a friendly atmosphere where most members are known on a first name basis. Their main goal is for everyone to have fun and relax.

The main focus of the Guild is primarily PvE, However some members have been branching out lately into the PvP side of things. The Defenders of the Blackblade are currently a Kurzick Guild (under dispute)

We have had this current cape since the 25th of July 2005. The picture below illustrates our old cape (on the left) and our existing one (on the right). 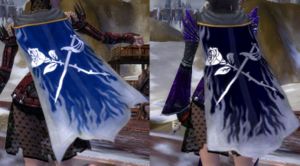 This is Guild Wars 2 design as taken from beta-test weekends:

More information about alliance history can be found on the Alliance page.